Was told by someone that Four Seasons Roast Duck is a must-try in London. *Its not the Four Seasons hotel, but rather a very famous restaurant in Bayswater*

When I reached on 27th Dec, it was closed for holiday break. So we tried another restaurant called Gold Mine, also selling Roast Duck, just a few stores down the street.

The roast duck was the nicest I’ve ever tasted~ Crispy skin, soft and succulent meat, tasty dark sauce and the awesome chilli sauce was an ultimate combi.

Definitely beats any other roast duck place in SGP hands down, including my fav Crystal Jade Restaurant & Dian Xiao Er.

But since the Four Seaons Restaurant roast duck was the “original” stall which was highly recommended, I was determined to try it. So went back to Bayswater a few days later.

Finally got my hands on the legendary Roast Duck..tah-dah~ 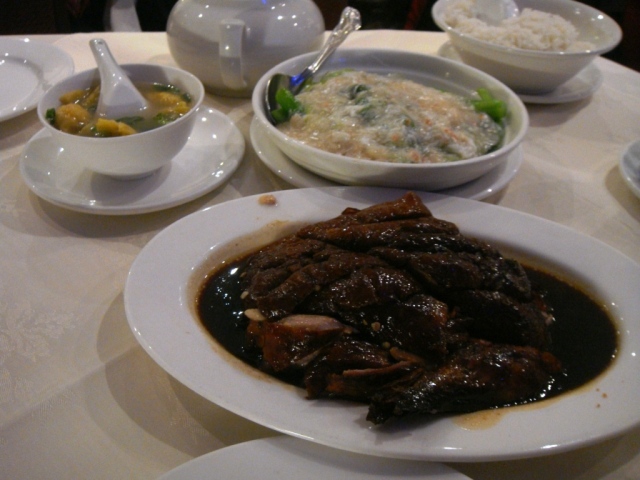 At first glance, it looked similar to the one I had at Gold Mine. But the skin is not as crispy and the meat not as soft…kinda disappointed…

There was a notice at the stall indicating that there’s a new branch opening in Bangkok. Read from internet that they are also available in Kuala Lumpur. Thou reviews generally agreed that the London stall still tasted better due to the fatter ducks available in UK.

So I declare Gold Mine as the winner of the Roast Duck War in London. I luv it sooooooooooo much that we made a trip to Bayswater to takeaway a packet of Roast Duck Rice before we catch our flight back to SGP…