Pick up any destination guide book on Iceland and you’ll likely to find them recommending Blue Lagoon as a must-visit sight. More often than not, it is best scheduled either as the 1st stop or the last stop of the trip due to its close proximity to the Keflavik airport. For those who came thinking that the Blue Lagoon is a natural phenomenon would be disappointed to know that the geothermal spa is a man-made lagoon which is fed by the water output of the nearby geothermal power plant.  I can’t help but bear the lingering thoughts that I’m soaking myself in some “waste water”…Nonetheless the water is said to be rich in minerals good for the skin. 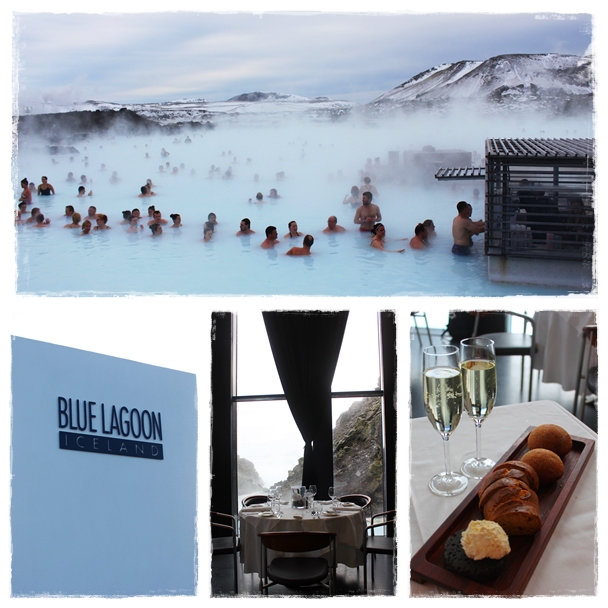 Since it would be our last stop before catching our flight to UK, we booked a package that included access to the Blue Lagoon and reservation for lunch at their LAVA Restaurant.

Included in our package was a complimentary drink only if we dined at the restaurant. Since we knew that this could probably be our only proper meal for today due to the flight and travel time, we decided to pay for a better meal rather than having light bites from the cafe at the lagoon.

Having mastered the art of saving money in Iceland, we again ordered a 3-course meal to share amongst the 2 of us. So we had the Slow cooked Arctic char
Fennel, pear, char roe, mustard followed by Pan fried cod & roasted langoustines Cauliflower, fennel, pear, dill as the first 2 courses.

How could we miss trying the Arctic char in Iceland, where they are one of the largest producing country of this freshwater fish. Although I am not exactly a fish-lover (when cooked in Western style), I must say that the fish dishes in Iceland never failed me. Both at Dill Restaurant and here, the fish had been excellent. To an untrained eye like mine, I thought the arctic char looked like salmon. But when tasted, its flesh has milder flavour (less fishy) and a more delicate texture.

While the pan fried cod and roasted langoustines was also pretty tasty, I still preferred the Arctic char more as it was more exquisite. 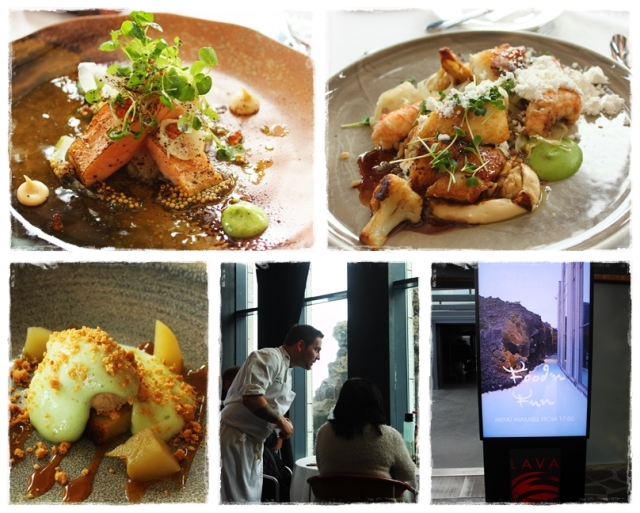 After finishing our 2 courses, we waited quite a while for the dessert to be served. Looking at the time, our “pre-departure jitters” set in…We were counting down to our flight scheduled to depart at 4.30pm and its 2pm now. Although it takes less than 20 mins to reach the airport and we saw someone wrote that the Keflavik airport is pretty small and arriving 2 hours before departure is more than sufficient…We were wary of “Murphy’s Law”…

During my travels to Europe, I often wondered if the locals could feel our “kan cheong” (anxiety) vibes. I felt that Asians often appeared to be impatient, curt and rude as we tend to fervently wave our hands to get the attention of the servers. Not only that, the way we speak tends to be instructional as we don’t often engage in much pleasantries with the staff. Even as an Asian, I do get irritated by other Asians who behaved inappropriately. However given our situation, we had to politely ask them to check on our dessert explaining that we have a plane to catch…

Meanwhile a group of guests that came and sat at a nearby table caught our attention as there were 2 of them in chef’s uniform in the party of 5. Shortly after settling down, one lady took out a rather pro-looking camera while one of the guy in chef’s uniform was studying the menu. Since we knew that LAVA Restaurant is also one of the participating eatery for the Food and Fun Festival 2015, we guessed that they should be some special guests. Soon we saw the guest chef – Michael Wilson came out from the kitchen to meet them! I presume the chef was here in the afternoon to prepare a hospitality meal for media tasting since the special menu for the Food and Fun Festival is only available at dinner service.

Our dessert of Apple & brown butter Brown butter ice cream, apple and celeriac foam, apple, caramel, brioche finally arrived and we whopped it down in less than 5 mins while we spent the next 5 mins anxiously waiting for the bill. 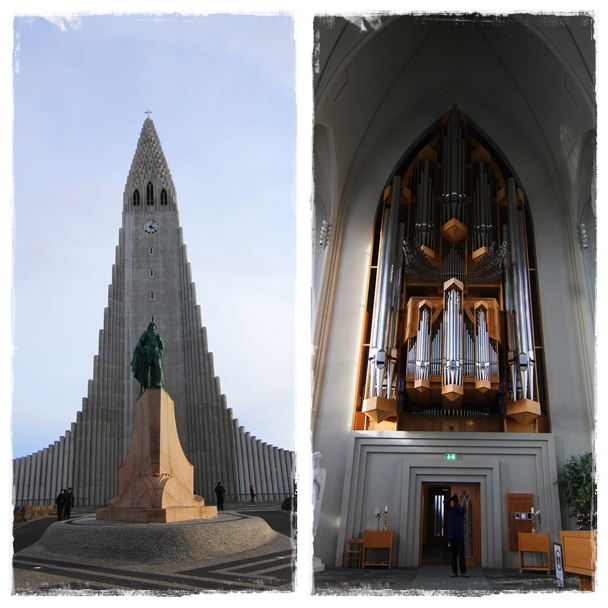 The iconic church – Hallgrímskirkja with statue of explorer Leif Eriksson in front of the church. 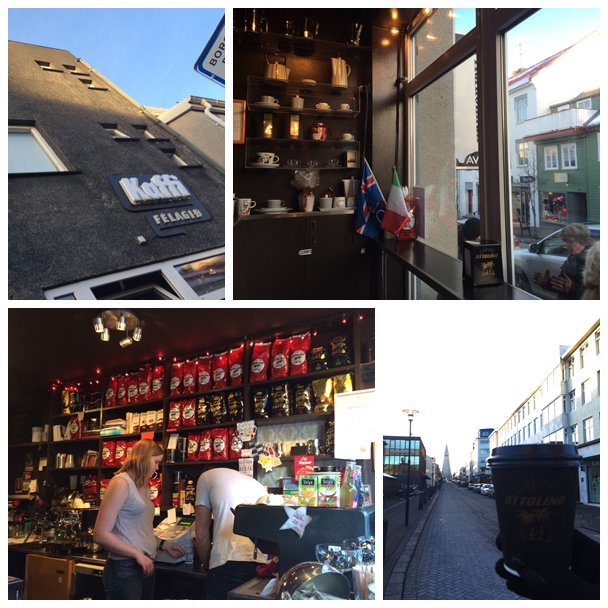 Walked by Kaffifélagið and went in to grab a cuppa.  Its a tiny outfit with most of the guests coming in for takeaways or hanging outside the place to chat. 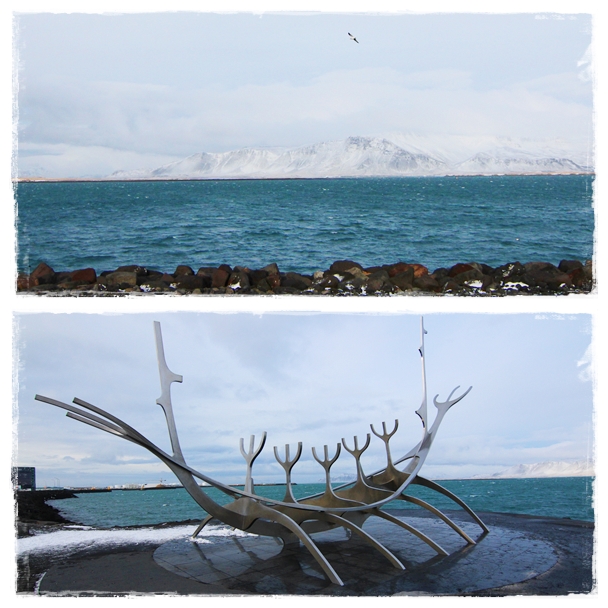 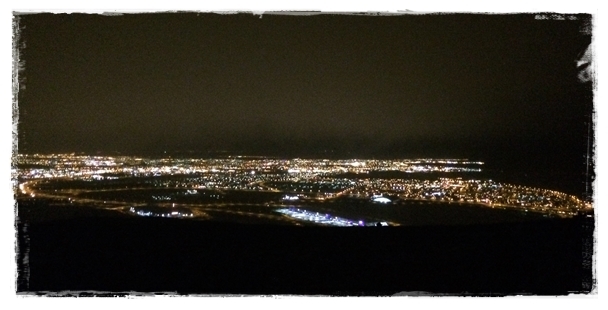 Night view of Reykjavik city…endured an extremely bumpy off-road journey up a mountain to see this. No Northern Lights…just city lights… 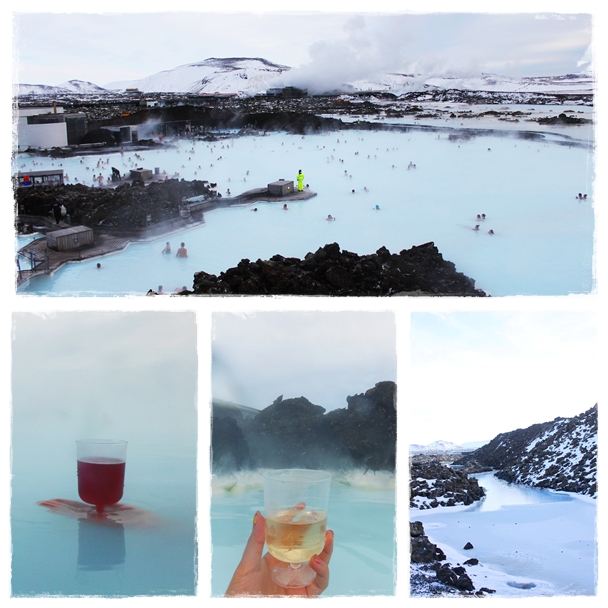 Had 1 round of drinks at the bar in the middle of the lagoon. =)

In the spirit of paying it forward, I guess it would be useful to share some tips for visiting Iceland since I’ve personally benefited from reading various blogs of others who had been kind enough to document their trips. While most information can be found online, it still took me some effort to research on some of the lesser known aspects (issues more unique to us) which I will highlight below.

– Unmanned petrol pumps Credit cards are widely accepted but if you are travelling on rental cars to countryside with mostly unmanned petrol pumps, make sure that you know the PIN number of your card. As I seldom use PIN number for my credit cards, to be doubly sure that I wouldn’t be trapped without fuel, we purchased pre-paid cards in the Reykjavik city at the manned stations before travelling out. The more common petrol pumps we saw while we travelled in the South are N1 and Olis. 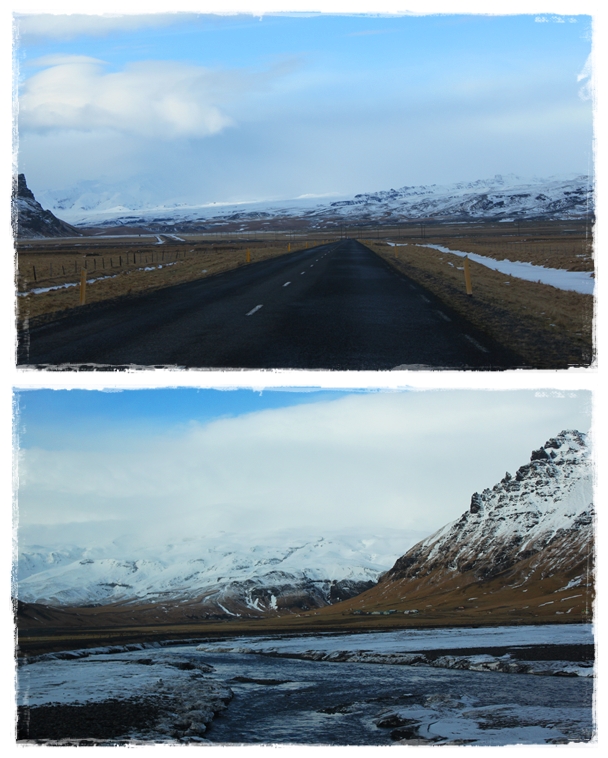 – Grocery stores We purchased food from several stores: 10-11 (open 24 hrs), Kronan and Netto. Other than 10-11, most of the other stores close by around 6pm. However the price at 10-11 is also significantly higher than the others. One of the Netto stores we went happened to be a supermart and I found that items from ICEWEAR was sold at a cheaper price there than at the boutique store.

– Hiking shoes To buy or not to buy? I have running shoes but not hiking shoes. In Singapore, jogging is a more common activity than going hiking. The highest hill we’ve got is Bukit Timah and I’ve never been there before. However most of the tour operators (even the activity specific ones) like Golden Circle Tour, Glacier Walk, Ice Caves etc all specified hiking shoes as a requirement. We found 1 shop in Reykjavik that rents hiking shoes but it’ll cost around S$65 for 6 days (5 nights). Better off paying a bit more to get one pair of my own… Another point related to shoes is to bring snow shoe spikes in case of icy grounds during winter.

– Mobile wifi We researched on which operator to use (rent in Singapore) and decided on Xcom global as some operators don’t cover Iceland. The reception was not perfect but still has 1-2 bars (out of 5 bars) most of the time. Bring a portable power bank as electronic devices lose battery very quickly in the cold weather.