Since sea-planes can only fly before evening, we arrived at the airport at around 4pm when our flight is 11pm. That left us with plenty of time to make a trip to the capital of Maldives, Male. The city is about 15 mins away from the airport by local ferry. Initially we wanted to make the short trip on our own as its a very small and walkable city. However we were strongly persuaded by almost everyone: from the hotel staff, the airport staff to the agent assigned by our hotel to meet us at the airport, that we should be accompanied by a guide for the trip…Although we were pretty comfortable to make the trip on our own, part of me felt that its a strategy by the locals to help get work/job for many of them who relied on taking such ad-hoc jobs for a living? (Disclaimer: I do not think that everyone of them takes commission or whatsoever, I felt that they wanted to bring some tourism dollars to Male for the economy).

Eventually we agreed to hire a guide for US$20-25 for the 3 hours walking tour. In fact, the duration of the tour is not fixed but the guide will show us around and accompany us back to the airport after we finished what we wanted to see.

Our guide brought us to a few of the major attractions: Grand Friday Mosque, Fish Market, Local Market, Maldives National Defense Force HQ etc. Of course he also brought us to a souvenir shop, which he told us we could bargain for the price if there’s anything we like to buy; however we weren’t coerced nor pressured to buy anything (which was a relief).

I guess for me, its not really about the sights but its through the conversation with the guide that we get to know a bit more about Maldives. We also get to know Maldives through small talks with the staff at the resorts that we stayed in.

Some of the interesting information I gathered from the trip were:

As we need to have our dinner in Male, we also left it in the hands of the guide to bring us to a place for a meal. *This, I don’t know if the guides were commissioned?*  Although there is no way we could ever find out if the price at this restaurant is overly exorbitant, we could only make deduction. We looked through the menu presented with a clear price list and spotted the drinks menu. We decided to use that as a basis for comparision as a few days ago we bought a can of coke at the airport cafe for US$2 (in resorts, the coke will cost around US$3.50).  Here in the restaurant it also cost about US$2. So we thought the pricing of the food is probably pretty standard “tourist price”?

This restaurant serves a mixture of Western, Indian & Chinese food. We decided to go with Indian cuisines since Maldives is close to India, it’s probably the most conservative choice.

We were surprised with the quality of the Chilli Octopus which cost Maldivian Rufiyaa (MR) 230 which is about US$15. It was surprisingly quite Chinese in taste. The Fish Curry cost only MR110 (US$7) and it turned out real tasty! We were impressed with the affordability of fish curry here (compared to Singapore of course).

The shocking thing was the bowl of rice cost more than the fish curry…The rice cost a whopping MR180 (US$12)! I guess it’s largely because the rice were all imported from their neighbouring countries such as Sri Lanka. But Asians typically can’t have a meal without our rice as staple right? I seriously think this is where the restaurant earned their profits…other than the overpriced Lobsters…We were probably the most miserly guests in the restaurant as the others were seen ordering Lobsters to go with their meal…

Anyway since its the last meal in Maldives, we shall not let this incident spoil our mood. Other than the unjustifiable cost of the rice, I did enjoy the 2 dishes. 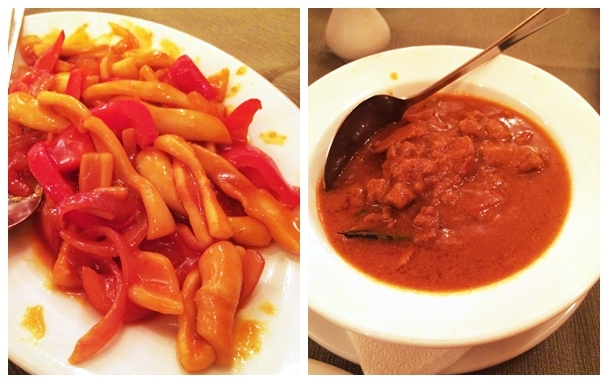 Here’s the last shot of Maldives that I captured – a rainbow over their national flag, in front of their police headquarters building. =)

Other photos taken from our earlier sea-plane ride: 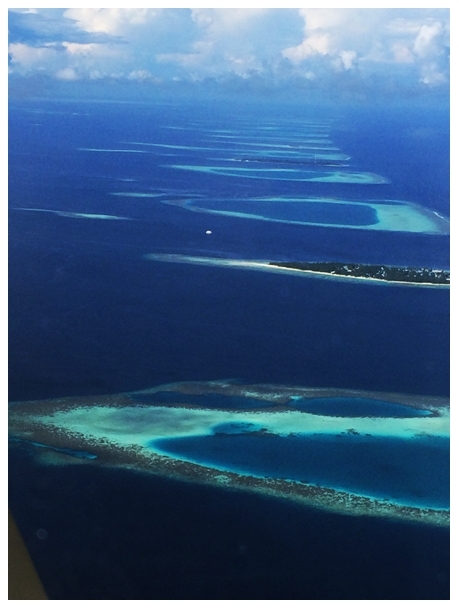 Beautiful landscape, or seascape rather?

Back in Singapore Changi Airport, there are Star Wars fighter planes on display in T2 and T3.