As mentioned in my earlier post, we only made one restaurant reservation in Budapest.  That is none other than Onyx Restaurant. They are one of the 4 restaurants awarded with 1-Michelin star in Budapest, Hungary at the time of our visit. However a few weeks after our visit, it was unveiled that they had become Hungary‘s first and only restaurant awarded with 2-Michelin stars in the 2018 Main Cities of Europe Michelin Guide.

You might have noticed that I hadn’t been posting about dinners in Budapest, cos most of the time we were tired and sleepy by 8pm. The multi-city tour (Salzburg-Vienna-Budapest) over 1-week seem to have taken a toll on us by the time we arrived in Budapest. Another reason was the apprehension over Hungarian cuisines. We don’t really know what’s there to eat…except drinking Goulash soup.

Anyway, we picked Onyx Restaurant as they offer Hungarian classics with modern elements. I guess knowing that there are some modern elements in it probably make it sound more palatable to our taste buds.

We started our meal with small snacks that immediately introduced us to the famous local ingredient – Paprika which is often associated with Hungarian cuisine. I was expecting to see lots of Paprika potato chips in the supermarkets, but we didn’t find any… Also tried the Sabar Olaszrizling white wine as aperitif. Olaszrizling is the most common grape variety in Hungary. 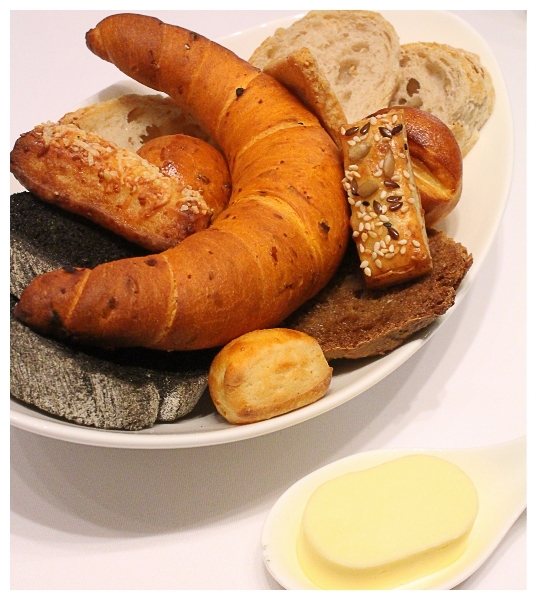 The national spice also made its way in one of the breads. I really enjoyed the variety of bread offered and loved every single piece!

Lunch menu was offered with 2 choices for each course, so naturally we had one of each to taste 8 different dishes (4-courses each). Starters were: Cod, sturgeon caviar, buttermilk, dill and Goose liver, pear, candied ginger.  Both featured famous Hungarian produces: caviar and goose liver. We opted for the wine pairing which allowed us to taste a variety of wines from Hungary. This dish was paired with the 2008 Furmint Lapis white wine from a wine region located in northeastern Hungary.

The cod carpaccio was beautifully laid with dollops of Hungarian sturgeon caviar, adorned with tapioca herbs, cucumber slices, crispy bread crumbs and at the base was  buttermilk with dill oil. This sort of dish is the hallmark of a decent fine-dining establishment. I’m happy to start my meal with this wonderful and luxurious dish. 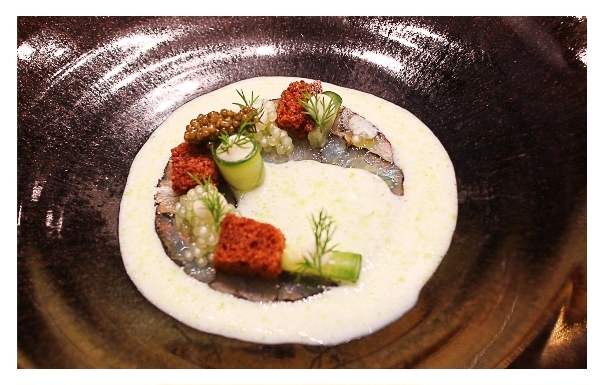 While it is widely known that France is a lead consumer of the expensive (albeit controversial) delicacy, Hungary is one of the major producers of foie gras pate (together with France and Bulgaria). We saw many shops selling canned or bottled foie gras pate at the Great Market Hall and they are also extremely affordable compared to other countries. 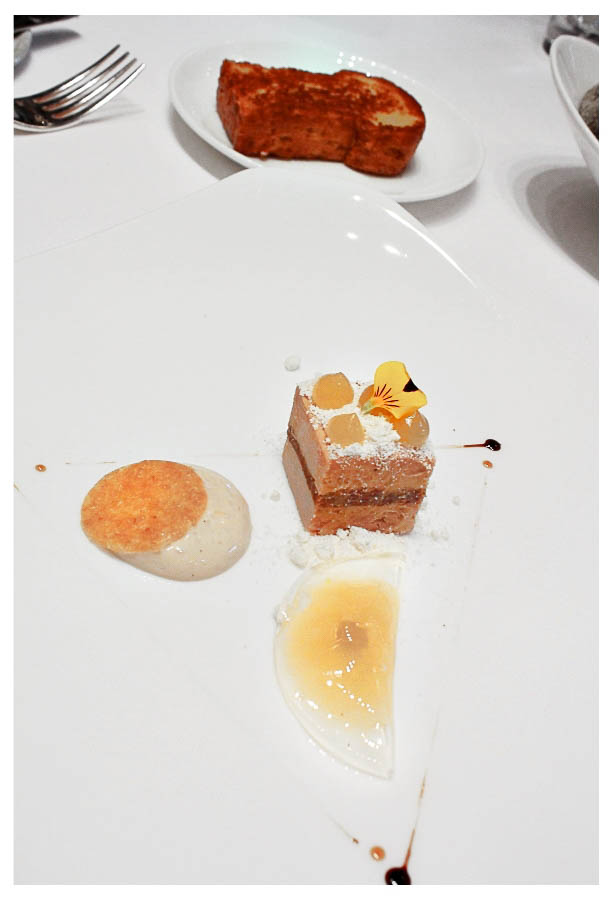 The goose liver pate was served with sunflower seed chip, pear with ginger jelly and home-made brioche. The brioche was amazingly crispy and went well with the rich pate. I just felt that the plating does not seem congruent with 3-separate elements fenced together by a triangular frame. 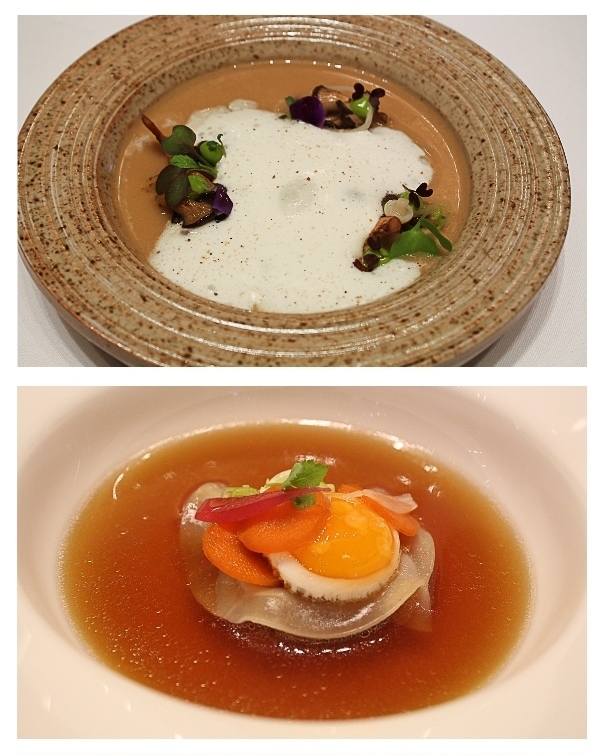 The Oxtail consomme has an oxtail dumpling inside, with a quail egg on top. An elegant and flavourful soup.

One of the main course was Aged rib-eye, celery variations, buffalo mozzarella, onion powder paired with a Merlot wine Solus 2012 Gere Attila Villany. Villány is one of Hungary’s top wine regions, known for its reds and rosés. The steak was really tender and we cherished every slice of it, taking time to chew and savour its flavour. 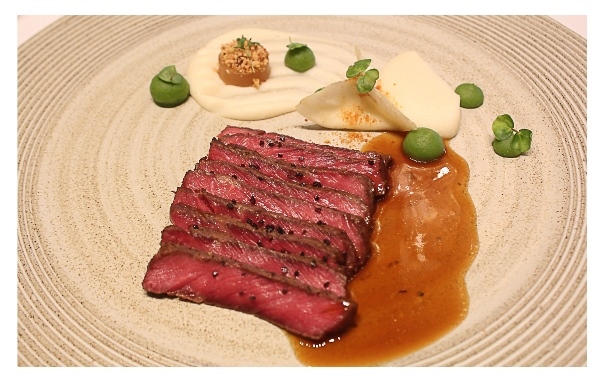 Another main was Trout, “fish soup”, shellfish Hungarian “fish soup” sauce, razor clam and black mussels with tarragon and tomato. Being a land-locked country, I was surpised to hear fish soup as a native Hungarian dish. Turned out it is a hot, spicy paprika-based river fish soup. Loved how the freshness of the fish was brought out by the spicy base, complimented by the chewy razor clams. 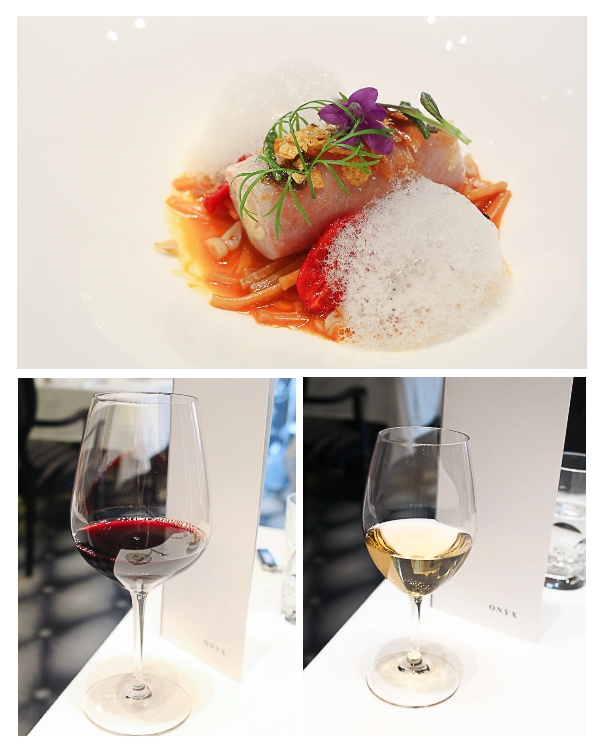 Dessert wine was choice between 3 Takojis of different level of sweetness. While eating at Blue Rose Restaurant, the kind staff already updated us that Takoji is grouped into 3 types of sweetness level. So I told the sommelier that I would prefer the least sweet one. I was served the Takoji Szamorodni 2012. In fact the sweeter level wines tend to be more costly, such as the Tokaji Aszu 6 puttonyos. 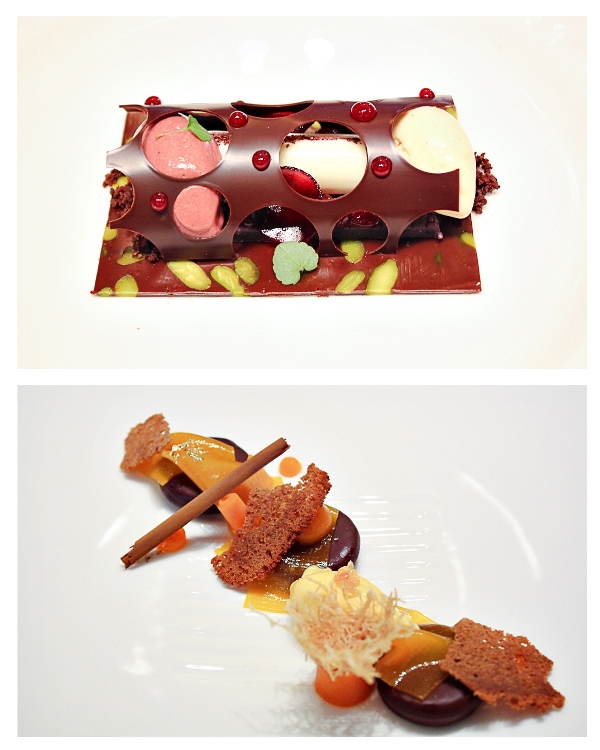 Dessert was the beautifully sculpted Chocolate, blackcurrant, Piedmont hazelnut (upper) and “Turo rudi”, sea buckthorn, pumpkin (lower). Túró Rudi is the name of a curd snack popular in Hungary so I guess the ingredients used for the dessert is probably the same as that. I was impressed by the quality of chocolate used for both desserts. 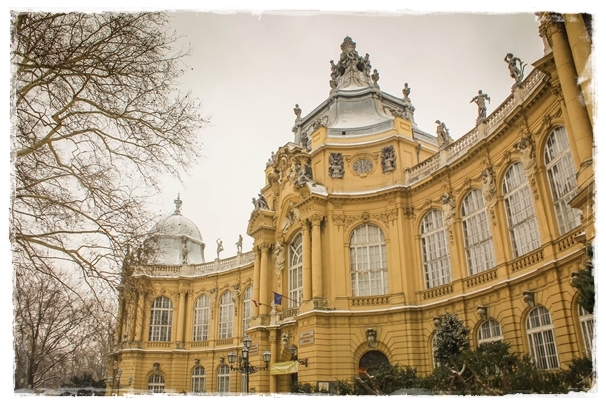 I read about a fantastic castle located in the Budapest City Park that featured copies of several landmark buildings from different parts the Kingdom of Hungary. It was interesting to note that the Vajdahunyad Castle comprises of different architectural styles: Romanesque, Gothic, Renaissance, and Baroque. It felt odd that the sprawling compound was filled with twenty-one smaller buildings interconnected yet distinctly different in appearances. The whole place is collectively known as the Vajdahunyad Castle. Pictured above is just part of the castle and it also functions as the Museum of Hungarian Agriculture. 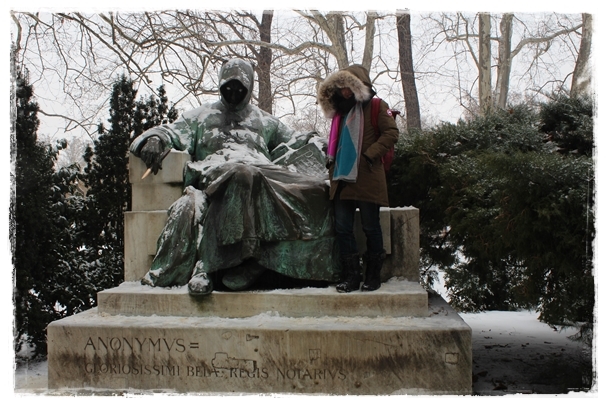 Chanced upon a statue named Anonymous within the compound. This mysterious statue of a hooded figure portrays a famous chronicler whose identity is unknown.  The statue holds a pen in one hand, and legend has it that those who find Anonymous and touch the pen will gain great writing skills and find literary success. I thought it reminded me more of Death Note (Japanese manga series). 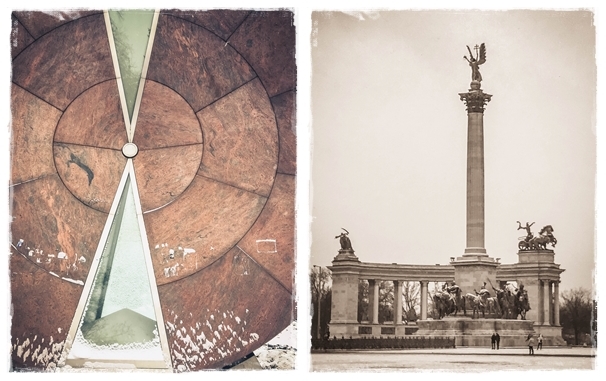 Other interesting sights around the City Park include The Timewheel – one of the World’s largest hourglass standing 8m high. It is only turned once a year.

Major attractions near the City Park is the Heroes’ Square which is the largest and most symbolic square in Budapest and the Széchenyi Thermal Bath which is the largest medicinal bath in Europe. We skipped the bath as we would like to spend some time over at Buda side. 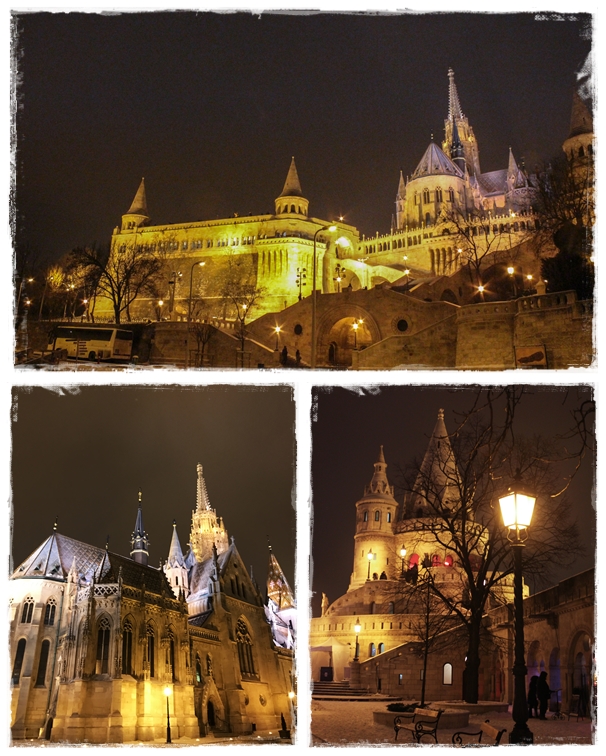 Buda and Pest are formerly two cities separated by the Danube River. Buda, on the West side of the river is hilly whereas Pest on the East side is mostly flat. 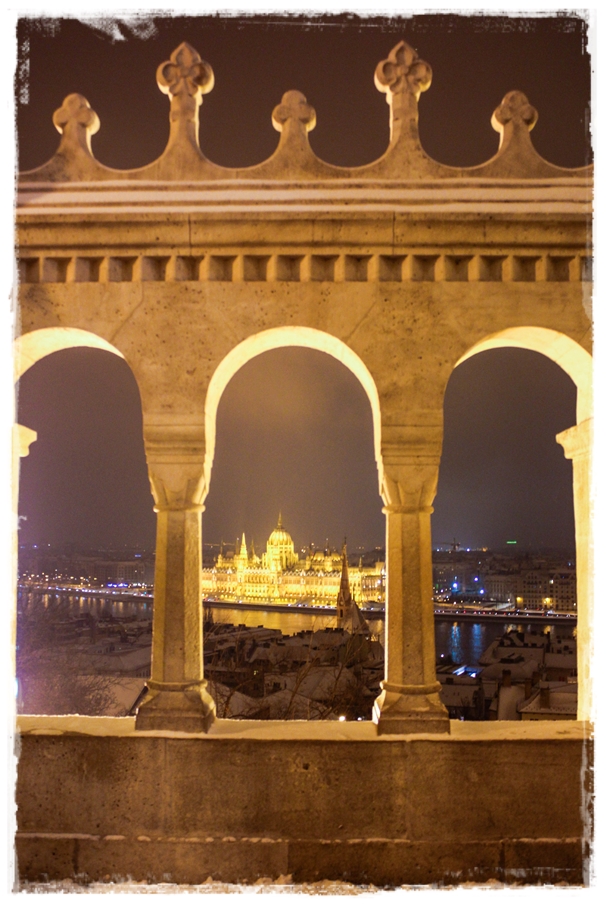 The hilly Buda side offers panoramic view of Pest across the Danube River including majestic Hungarian Parliament Building. 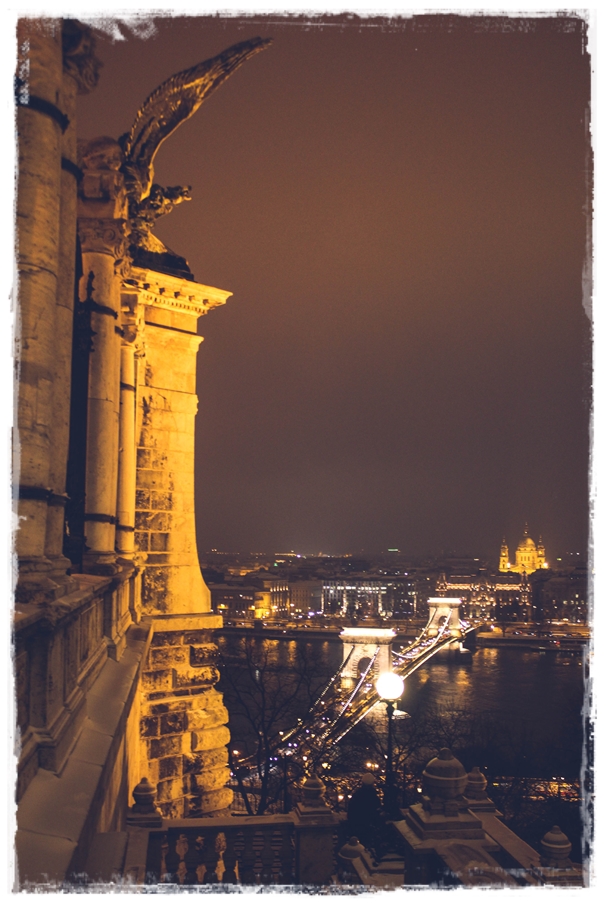 From the Fisherman’s Bastion, we walked about 1km to see the Buda Castle Royal Palace which is a historical castle and palace complex of the Hungarian kings in Budapest. 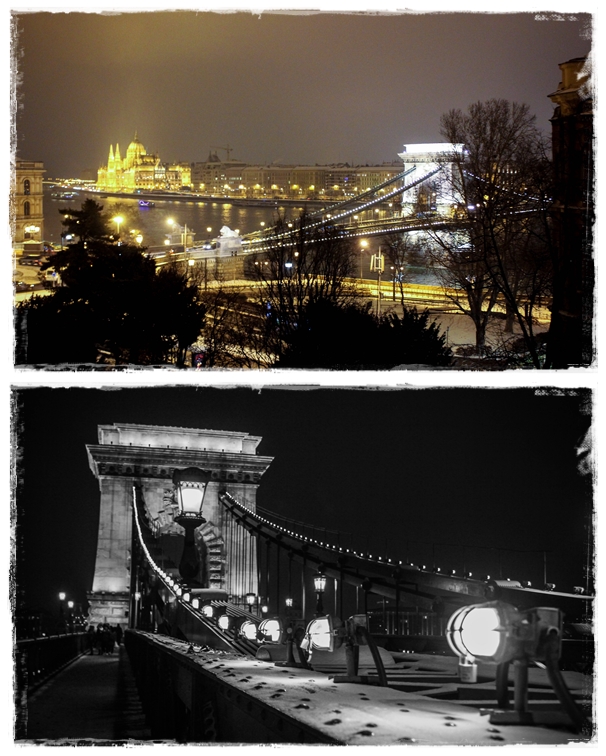 Rounding up our walking tour by crossing Széchenyi Chain Bridge that links Buda and Pest.

Given the limited number of days we have in Budapest, we were glad that we chose to visit the attractions over at Buda in the evening. Do remember that Buda is on the West bank, so depending on what views you’ll like to see you will need to plan your walking route.  We had originally wanted to see the Hungarian Parliament House under the rays of the setting sun, but the weather was too cloudy. Nonetheless by the time we reached the Fisherman’s Bastion area, we were happy to know that the buildings are illuminated by floodlights at night.

While processing and reviewing the photos taken, I had fun adjusting the photos using different settings. I realised that the photos looked great especially in sepia or black & white tone.