After having some cakes we took a walk around the Central area hoping to work off some of the food and avoid the lunch crowd before heading to our next food stop.

Saw this interesting plaque by chance – a location with historical value as its the site where Swedish Football Association was founded in 1904. 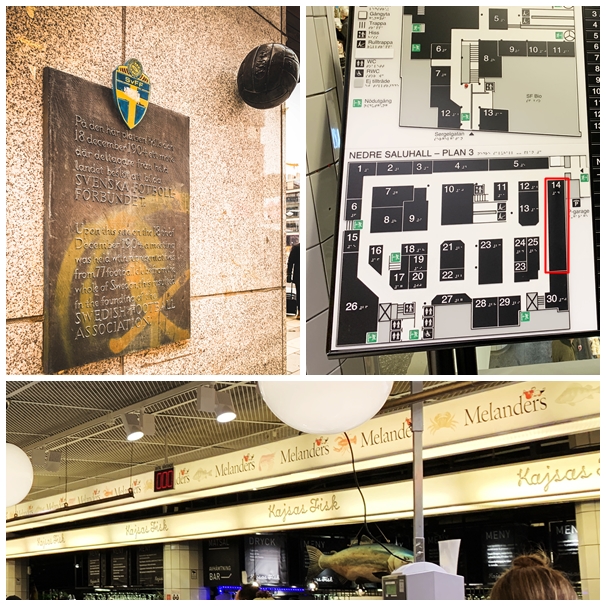 Our next stop was Hötorgshallen Saluhall – a food hall housed in the basement of a modern complex. It means Haymarket in English.

There are two stalls that I shortlisted and they are located next to each other. Starting with Kajsas Fisk occupying unit #14 and Melanders (in next post) occupying unit #25.

Toast Skagen (prawns/shrimps on toast) is an absolute Swedish classic named after a fishing port in Denmark. It essentially is a piece of toast topped with shrimp mixed with mayonnaise, creme fraiche and topped with kalix löjrom roe.

While the toast had a nice crisp to it, the small shrimps were tough and rubbery. Not sure if that’s how it should be? Presumably the colder Nordic waters made their flesh tougher??? I tried other shrimp salads during my trip and they were all generally difficult to chew on…

The best-seller here is the Svenska fisksoppa (Fish Soup).

At first glance, the colour of the soup reminded me of Goulash Soup I had in Budapest. But unlike Goulash that is made with beef, Svenska fisksoppa is a delicate seafood soup made with fish stock, fresh salmon, cod, mussels and juicy prawns; topped with tangy sour cream. Do also note that the soup is generously portioned, sufficient to be a main on its own for me. This is the ultimate comfort soup perfect for the cold winter~

Although the seating area is limited, don’t be turned off by the queue. Service staff would assist to allocate seats once you placed your order at the counter. I would say this soup is a must-try when in Sweden.

The famed 3-Michelin starred restaurant in Stockholm – Frantzén. They opened an outpost – Zén in Singapore in late 2018, taking up the shophouse unit vacated by Restaurant Andre. Had to give this place a miss this time round…we could still try their outpost back in Singapore.