The Potting Shed @ The Grounds of Alexandria, Sydney

Having seen many beautiful instagram photos taken at The Grounds of Alexandria, we listed them in our itinerary with plans to stop by for a leisurely brunch at the photogenic cafe place.

Without any in-depth planning, we were overwhelmed when we reached the expansive compound. It was a maze filled with so many people wandering around that we felt really lost… 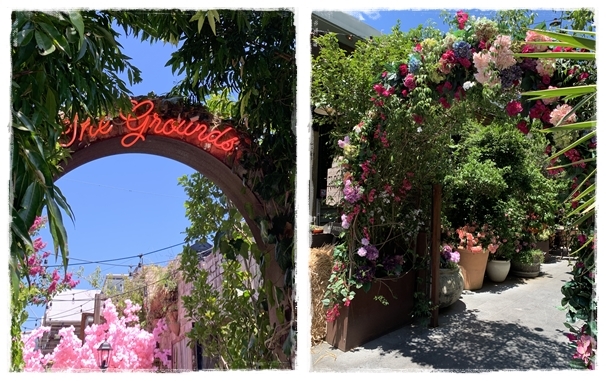 Initially we had doubts on whether we were at the right place. The alleys were filled with mixture of real and artificial flowers such as the bright pink Sakura blossoms. Endless stream of people were posing for photo opportunities along the narrow alleys…It seemed more like a marketplace selling flowers and garden plants as we walked by a florist shop (?!). 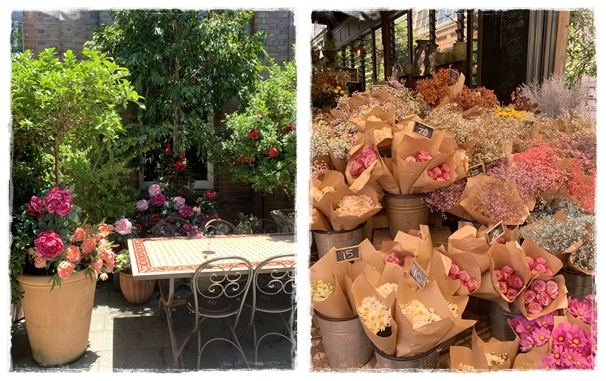 After trying to orientate ourselves, we found two main areas for dining: The Grounds Garden and The Potting Shed. The Grounds being a courtyard with free seating and self-serve concept, food served on takeaway plates. It was too crowded for my liking, so we tried our luck over at The Potting Shed that is a serviced eatery with a short queue. 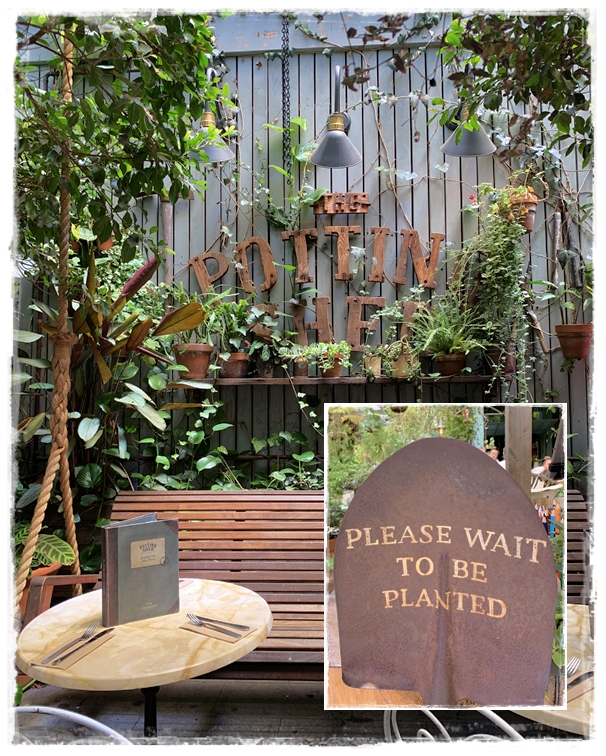 I didn’t bear high hopes of getting a table since it was a busy weekend but decided to just queue and ask. Thankfully the staff informed that they have a table available for us, with a condition that we have to finish our meal within a 1.5 hours window – not a problem for us. 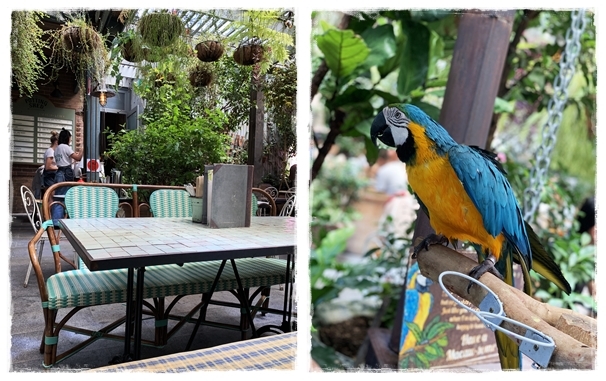 Once seated inside, it was a respite from the hustle and bustle of the crowd packing the walkway. True to the namesake, the area was filled with lush greenery with many draping potted plants hung from the ceiling. I’m loving the laid-back space filled with colonial style rattan furniture. There was also a feisty pet Macaw in the house.

It was only upon studying the menu that I realised that there was no Coffee nor Pastries served here when I was intending to have a Brunch… Apparently there was another area known as The Cafe serving a selection of breakfast dishes… So it is highly advisable to study the layout below before visiting, especially if you are going to brave the crowd on weekends. Somehow we didn’t manage to find this map on their official website when we were visiting…If we had known earlier we would have parked at The Grounds Carpark instead of the multi-storey one at 2 Huntley St… 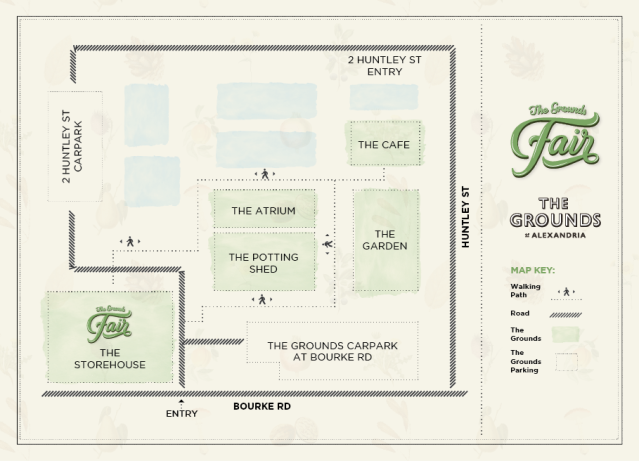 Nonetheless since we hadn’t had any food since morning, we were desperate to fill our stomachs. 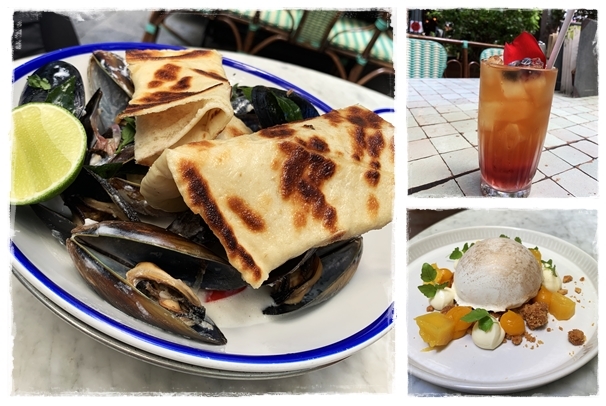 We ordered the Steamed South Australian Mussels with lemongrass, coconut, chilli and lime with grilled flatbread along with a Berry, Rose & Jasmine Iced Tea before rounding up with a Mango Parfait with macadamia crumble, vanilla, fresh mango & mango gel.

One can never go wrong with seafood in Australia as we thoroughly enjoyed every piece of the fresh mussels washed down with the refreshing iced tea.

Not wanting to forego my caffeine fix, we went over to The Garden to check whether it is served there. 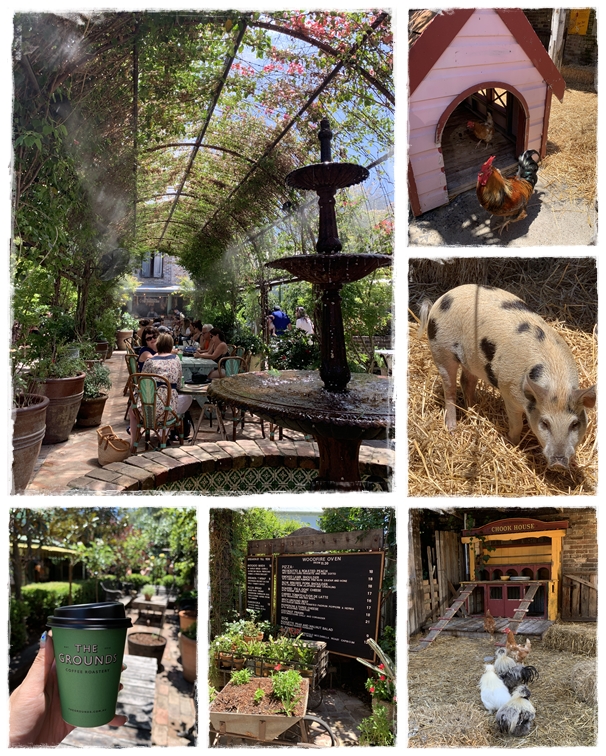 Over at The Garden the key feature was the arbour which, unfortunately, was rather bare when we visited.  Since it was noon time the area was pretty warm and had to be cooled with mist sprinklers. I would imagine that it would look very pretty and more cooling if it was fully covered with climbing plants during the right season.  There was also a small area that house the resident pig, Harry Trotter, with a few of his feathery friends. Great corner to keep kids entertained.

I do want to warn others to manage their expectations. Before my visit, I had never read any reviews from the bloggers to prep me for the massive crowd (perhaps due to it being the holiday season and a weekend on the day of my visit?) nor the lack of layout map at the sprawling area.

While the concept and decor were all carefully curated and it worked its magic to draw in the visitors, it had grown a tad too touristy (the downside of a successful Instagram PR?). If you wanted to take those romantic and fairy-tale like portfolio shots, be sure to arrive early and avoid popular hours.

For me, I left the place happy after I finally managed to grab my cuppa. I would probably stick around much longer to explore all the spaces if it was not so jam-packed…

This entry was posted in Australia, Bistro & Cafe and tagged Australia, Sydney, The Grounds of Alexandria, The Potting Shed. Bookmark the permalink.